Turbines in this Collection:
(click hyperlink to jump to that engine type)
A little about Karsten's Turbines

Unlike the other engines makes in my collection, this maker doesn't have a piece more than 10 years old and some are less than 2 years old as of this writing (Sept 2009).


These pieces are generally NOT available on eBay, in antique stores, flea markets or the other usual sources.  Each example I have was either a private sale, purchased directly from the gent who made them or in a few cases from an online retailer representing the maker's commercialized offerings.How does something become a "collectible" when it's newer than the car many folks drive including myself?  I guess it happens when word of mouth demand is larger than the supply available.  You see, these engines are all made by a young model steam engineer named Karsten Gintschel of Gintschel-Modellbau, in Cottbus, Germany, a part of former East Germany.

I would never have heard of Karsten's work had it not been for noticing several of his turbine designs in the Steam Gallery website.   Steve, owner of the gallery was not interested in selling his finds and I can understand why.

I don't have examples of all of Karsten's pieces, in part because I simply can't find a few of them I would like, given the low numbers made.  A few of his other pieces just didn't strike a chord with me but I always have an eye out for one that does.

I have previously had examples of all five types of Karsten turbines and engines, but have since reduced my collection to the ones I really enjoy the most...those in category 3 & 4 above.

If other Karsten collectors are reading this, I'd love to share information and see what you have.

In 2007 Karsten introduced several completely new designs inspired by the rotating SteamBall concept, but suspended in some unique architectural framework that looks like it was plucked from the Victorian era or borrowed off the Eiffel Tower!

I was fortunate to find one of these 2007 models on eBay and delighted to see it was #001 of the series.  I have several other numbered Karstens, but never the first one. Pictured below is the piece Karsten refers to as: In principal, this operates like the earlier rotating SteamBall /Heron inspired type I already have, but with the unique latticework suspending the rotating boiler.

The overall finish is more professional than in earlier models and bears both a Gintschel Modellbau ID tag and a serial number tag. The boiler seen closeup below, has also taken on more of a sci fi/flying saucer look with a distinctive lip and riveted, silver soldered seams.  It holds about 15 cc's of water injected into the top.

As in Karsten's prior rotating boiler examples, everything rides on a post suspended on ball bearings.  The fit is so precise that it will rotate for 30 seconds with just a hand spin. For alcohol burners, Karsten's other pieces have used simple fuel bowls, vertical sets of wicks fed from hidden alcohol reservoirs and now this quite unique and attractive design shown below right. 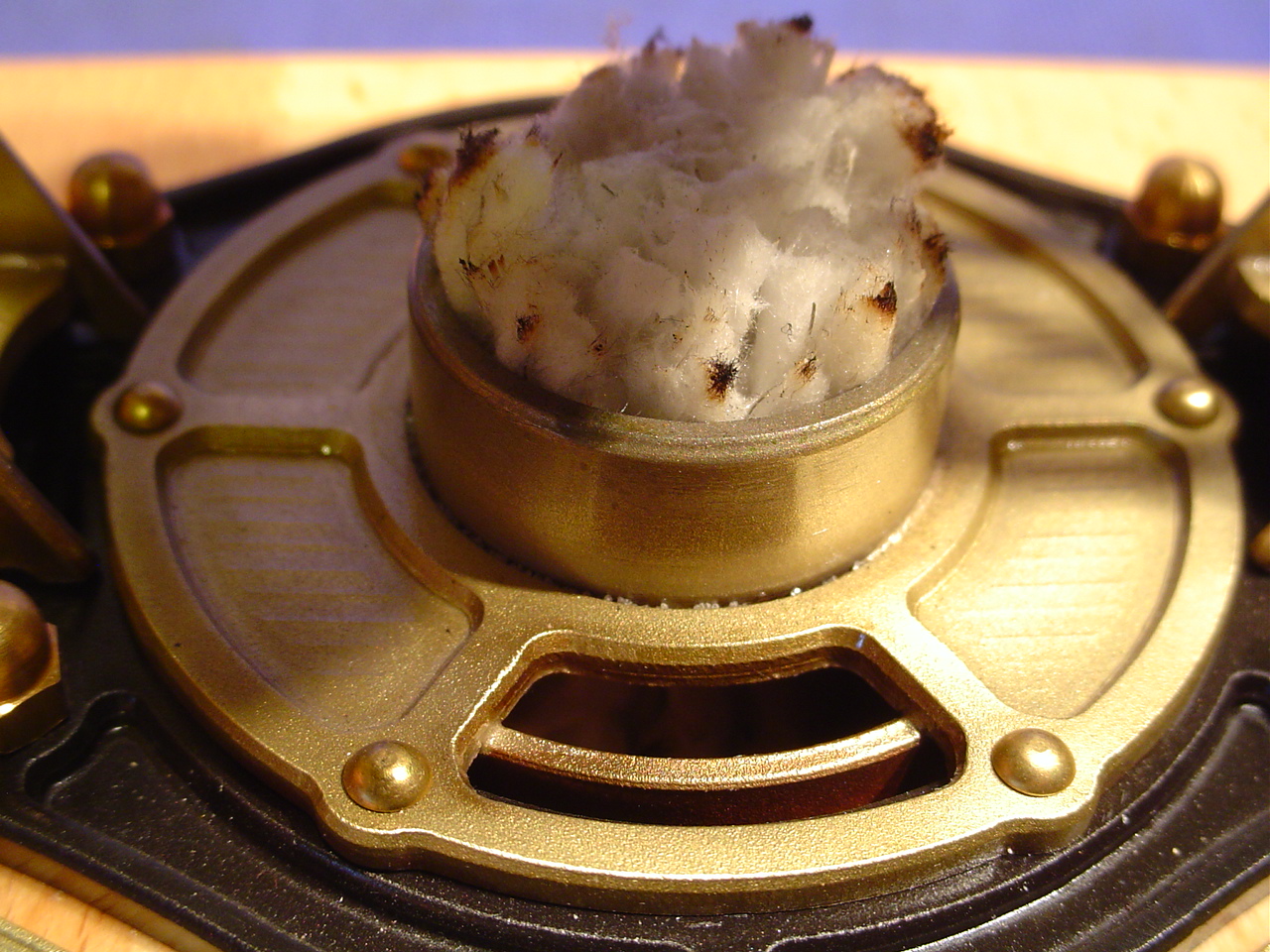 The burner has a proper reservoir beneath, with a large single wick in the center.  10-12 cc's of alcohol is injected in the opening seen in the front.

To my surprise, when running, this open "hatch" does not ignite...I don't quite understand why, but maybe air is drawn in there as the fuel is saturating the wick and feeding the flame.

Given this open "hatch" on the alcohol reservoir, the first time I fired it I had a wet towel handy just in case, but now with 5 or 6 firings, it performs perfectly...a very well executed design.

The following link shows this very same engine featured on Karsten's HomePage...he takes better pics than me for sure !!

Once lit, the burner produces a very robust flame that will bring the boiler up to operating steam pressure in less than 90 seconds.  Burn time is 5-7 minutes whirling at incredibly high speeds...perhaps 25,000 rpms or more.  Nice one Karsten !!!!